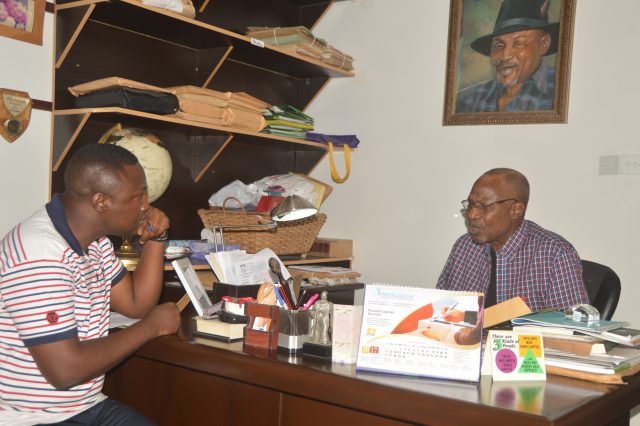 World Entourage: First of all, we want to congratulate you on your recent appointment as the Pro–Chancellor and Chairman of Council to the Federal University of Technology, Minna. What is your vision for the university?

Prof Odekunle: What I will say is that the University is not new; it is an established institution. Therefore, as the new Pro-Chancellor and Chairman of Council, it is not my job to start formulating a new vision for the university. We already have an existing vision and mission clearly indicated, and I go along with that. As we speak, Federal University of Technology is the number one in terms of international ranking of specialised university in the country. Specialised university are those that deal with science and technology. In terms of all the universities in Nigeria, whether it is the first generation, second generation or whatever generation, it is number five. It is my responsibility to make sure that standard is not only maintained, but it is heightened to the extent that the University will not only be number one in Nigeria, but their ranking in Africa in that area will be such that the country will be proud of.  So, the way I see my mission as a tenured Pro-Chancellor, is to improve what is on ground and in the process of doing that, I have to ensure right things are in place, the academic standard and the administration of the university are built on integrity, openness, fairness and that due process is followed along with proper input of common sense in running the university and making sure that things go well. In summary, my job is to make sure that adorable mission and vision are vigorously pursued, even better than before.

World Entourage:   The ivory tower used to be known for excellence and discipline but recent development shows that corruption has creep into the system; as a member of the Presidential Advisory Committee Against Corruption, how do you think the issue of corruption in the ivory tower can me managed?

Prof Odekunle: What is good for the goose is equally good for the gander!!! The same policies, measures and approaches to corruption in the larger society should be applied. To me, what is important is the leadership of an institution. Leadership should emanate from the Council, the Chairman of the Council leading the Council and from the Vice-Chancellor leading the management of the university and this should radiate down to the Registrar, Deans, Directors and Head of Departments, which should also radiate to lower level administrators like Dean of Student Affairs, management of the hostels, management of health centres. In all of these, standard will be maintained, fairness must be engendered, and punishment of those found guilty must be prompt and certain. There are cases of corruption in the university that have come to my attention. Corruption is not only financial; there is also an academic corruption. If you sexually harass a student, if you change or award grades that are not deserved, if you alter examination results, if you did not publish an article and you said you are the one who did it. Such cases must be dealt with promptly and certainly. Once you do that you will maintain standard and reduce corruption, in the few months in which I have been Pro-Chancellor and Chairman of Governing Council, I have ensured that cases that have come to my attention are handled promptly.

World Entourage: Talking about due process, recently, the Council under your leadership appointed a new Vice-Chancellor, seamlessly; what was the magic?

Prof Odekunle: There was no magic to it. The appointment was based on the principles of fairness, openess, integrity and standard. Before the Council was reconstituted, universities advertised on which basis some people applied but the law also says that because of some Professor may be too ‘’shy’’ to apply for themselves, we should go round and identify credible Professors who we believe, have the ability, credibility and the background to be Vice-Chancellor and you ask them and bring their papers and you combined them with those who have applied. In the case at hand, we had sixteen candidates who applied based on the advertisement placed by the former Council, and when those applications arrived including about fourteen that were searched, we applied the criteria in the advertisement to sort them out. At the end of the day, candidates were considered by the Selection Board and these were invited for direct interaction. Before then, we had designed a format for scoring and we made sure that the design has three qualities; Richness, meaning the item you are going to score should cover all the criteria of having a good Vice-Chancellor. For example the candidate must be a Professor; your experience at the policy level. For example, whether you have been DVC, Dean, Director or Head; whether you have been able to attract funds to the university through research grants or whether you have participated in community service at local, national and international levels, level of competence in ICT and measurement of leadership character, measurement to articulate the ability you stated in your application, your demeanour, your appearance. We did this before we even look at the applications and is not somebody coming in to give us the criteria; we sat down and we debated each item that will be in the scoring then we agreed on the items. After we agreed on the items, we allocated scores. Again, we debated, deliberated and decided together as how much we give to somebody who has been a professor for one year compared to a professor who has been for five years; how much we give to somebody who has been a Deputy Vice-Chancellor and to those who have only been a Dean. So we covered as many items as possible. That is what I mean by Richness. Then the second character of that scoring sheet is validity. That is, to what extend does an item we have stated for measurement actually measure what we intend to measure? The third characteristic of the scoring sheet is reliability. Reliability here has to do with the consistency in the scoring sheet. That is, the extent to which the scoring sheet yield the same result if the process is repeated.”

World Entourage: Are you saying there were no internal and external influences in the appointment?

Prof Odekunle: No! No!! No!!! It doesn’t mean there were no attempts to influence the process. My leadership was to ensure that such attempts would have no effect on the process. I can tell you that factors that influenced our decision were what I promised in my numerous speeches when I came to the university. I promised that the processes will be fair, transparent and open. Those were what we applied.

World Entourage: On a final note what message do you have for the university community?

Prof Odekunle: It makes me happy that the university was very happy about the choice of the Council for Vice-Chancellor and they were very happy that the process was transparent and fair because the internal members told them how it all went. What I have for the university is what I have told you that they are already on a hill in terms of ranking and in terms of peace and security. What I will want the university to do is to find ways of ensuring that they do not only maintain their current standard, they improve upon it.

World Entourage: We wish you a successful tenure as the Pro-Chancellor of the University. Thank you very much for your time.

Prof Odekunle: Thank you too.