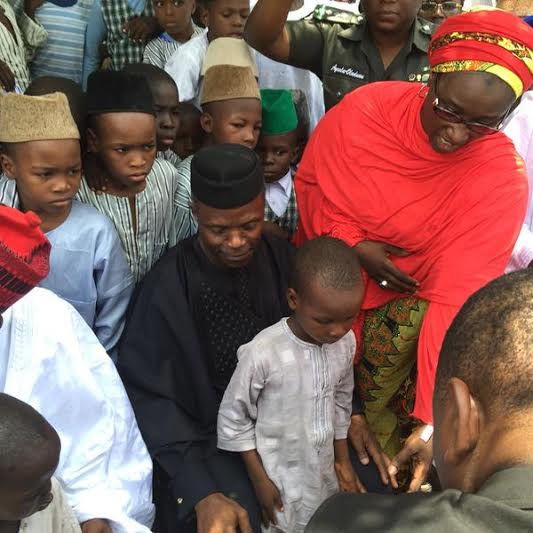 The present Administration through the National Emergency Management Agency has carried out two remarkable interventions that impacted positively to life of Nigerians. First is the Door-to-Door distribution of Emergency Food in the northeast. It is the first of its kinds since the beginning of the displacements with initial approval for the releases of 40,905.8 metric tons of grains for distribution to affected victims of insurgency. There is a total number of 1,937,992 Internally Displaced Persons (IDPs) enumerated in all the States in the North East. Partners like World Food Programme (WFP) and International Committee for Red Cross (ICRC) also serve other IDPs.

The second was the evacuation of Nigerians that were stranded in Libya after their failed attempts to illegally crossed over to Europe and have indicated their willingness to be evacuated back to Nigeria. These were identified to be living in both in Tripoli and its suburbs.  Additional information received indicated that quite a number of them were in the detention camps controlled by militia groups in Libya located in the Eastern and Southern parts of the country. Government engaged constructive negotiation getting most of those in the camps to be released before they were evacuated back home.

The Federal Government of Nigeria (FGN) in response to the humanitarian needs of the displaced persons in the North-East directed an Emergency Food Intervention project to be managed and coordinated by the National Emergency Management Agency (NEMA) in collaboration with the security services. The Vice President, Professor Yemi Osinbajo flagged off the project on

Vice President Professor Yemi Osinbajo flagging off the special food distribution in Maiduguri, Borno State. With him were DG NEMA and the Governors of Borno and Bauchi States.

The special food intervention was necessitated by announcement from the International Humanitarian partners; particularly the United Nations agencies providing various supports in the northeast, due to funding gaps it was compelled to scale down activities by 85% of the food distribution. Which was going to severely impact negatively on the Internally Displaced Persons. Therefore, the Federal Government, realizing the imperative to save the consequences, took the bold decision of scaling up its intervention and giving the responsibility to the multi-stakeholders committee under the coordination of NEMA.

The Agency as part of its action plan made presentations to the Office of the Vice President with CBN Governor, Ministers of Finance, Agriculture, Budget & National Planning and Foreign Affairs in attendance. The committee also embarked on a visitation to the North-East and in the process, held meetings in Maiduguri with the Theatre Commander, the Governor and Borno State Emergency Management Agency, UNOCHA, WFP, IOM, UNHCR, ICRC, NRC and a host of others in order to harmonise plans and strategies towards achieving optimal success in the implementation of the project.

The Emergency Food distribution project, which is the first of its kinds, had approval for initial release of 40,905.8 metric tons of grains for distribution as follows:

The modalities adopted in the distribution were strategically aimed at ensuring transparency and accountability while easing the stress of the beneficiaries having to queue or wait for a long time before being attended to. It also effectively moved from the use of the wet ration which involved cooking in the camp to the dry ration System in combination with the non – food items (NFI).

To be concise, the modalities are made up of transporting the food items to NEMA warehouses in the states, thereafter to the camp holding stores and locations close to or around the IDPs. Officers from NEMA were deployed for the direct distribution on the basis of door-to-door using the vouchers earlier distributed to identify the beneficiaries.

Some IDPs displaying the food items received and their vouchers.

2. EVACUATION OF STRANDED NIGERIAN IN LIBYA

The stranded Nigerians being profiled before departure from Mitiga Airport, Tripoli, Libya

SSA-P with some of the stranded Nigerians in Libya

To ensure proper coordination and smooth evacuation exercise after presidential approval was secured, an operational structure and workflow was established. The structure has the Secretariat at the centre coordinating the activities of the Fact-finding Mission in Libya (Short and Long term), the Reception Center in Port Harcourt, Monitoring and Evaluation, Media and Publicity, and the Airlines Operations. Upon establishment, members of the Secretariat and Monitoring and Evaluation were constituted, Fact-finding short-term mission trip and the Reception Center initiated.

The Fact-finding short-term mission team, composed of Chief Executives of the stakeholders Agencies under the leadership of the Honourable Minister of Foreign Affairs, were in Libya from Wednesday 3rd January 2018 to Saturday 6th January 2018 and carried out diplomatic negotiations processes which eventually guaranteed diplomatic backing for effective and smooth operations of the Technical Team. The efforts of the Fact Finding Mission saw to the airlift of the first batch of returnees (on Sunday 7th January 2018) as well as ensuring the provision of an enabling environment for subsequent evacuations.

The Reception Center at the Port Harcourt Airport was upgraded by the Federal Airport Authority of Nigeria, feeding and logistics was handled by the NEMA South-South Zonal Office and the area was highly secured by the Security Agencies headed by the Military. At Reception Center as strategic holding area, the returnees were adequately profile, assessment of their health status with adequate medical attention provided and thereafter released to their respective states governments.

As at 28th February 2018, a total of Two Thousand, One Hundred and Thirty (2,130) Nigerians were evacuated from Libya under this project. The evacuation was carried-out in five (5) airlifts; four (4) sorties by Max Air and one (1) by Medview Airlines

Due to deteriorating and extreme security situation in Libya the Operation was suspended. In addition to the fact that other Nigerians in Libya were identified in militia-controlled areas, which are not easily accessible, Nigerians in such areas can be released in small number and will take a longer period.

Arrival of the stranded Nigerians at the Port Harcourt International Airport

Another batch of the returnees disembarking from the aircraft