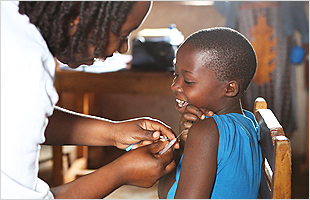 Amina Sule (not her real name) lives in one rural community which is about two hour drive to Waje in Fagga Local Government of Kano state. She looks like every female settler of the community – ruffled hair, shabby apparels, desperate looks and hopeless tomorrow. But behind this familiar appearance, are scars and pains, so deep, so engraved. Daily, Amina battles with hunger, harsh weather conditions, grotesque hygienic environment and above all, the agonising pains from the loss of her three year old son.

For Amina, seven years after marriage has been hell. She has been moving up and down, from one place to another, searching for a place of abode, searching for love, searching for food, searching for better life and searching for a child she can call her own. When the child eventually came, everyone could see a boisterous glee written all over her. But no sooner, the joy was short-lived; Ibrahim, her three-year old son died right in her arms. The difficulty in getting the child did not make losing him cumbersome. Guiltless Ibrahim died of malaria, a disease that can be prevented with high impact interventions, and treated with very low cost medicines.

“The day I lost the child was the day I lost myself”, Amina slowly uttered while her two eyes squirt of tears.

“I’m just trying to be like every normal woman here in the camp, but certainly, I cannot be normal again. How can a woman be normal when her source of joy, happiness is taken away? Little Ibrahim was my only source of joy in this camp, the only proof that one day we will be free again” Amina weeps profusely while sharing her ordeal.

Ibrahim was among the 7560,000 under five children who died in Nigeria last year and this figure represents the number of under five deaths recorded in the country annually. The Federal Government disclosed this recently during a two-day annual symposium on Integrated Community Case Management on Childhood Illness (iCCM), convened by the Federal Ministry of Health where child health partners and other stakeholders came together to assess the efforts made to avert deaths of under five children and to also device workable strategies and mechanisms for scaling up of the evidence-based interventions for the overall wellbeing of children.

During the symposium, Mr. Osarenoma Uwaifo, the Permanent Secretary, Federal Ministry of Health, who was represented by Dr. Abosede Adeniran, Head, Child Health Division, Department of Family Health, said that Nigeria contributes to 11 per cent of the overall global deaths of under-five children, ranking second on the list of countries with burdens of child mortality.

He said that one in every eight children born in Nigeria die before their fifth birthday and pneumonia, diarrhoea and malaria represented an estimated 58 per cent of these deaths with malnutrition underlying about 50 per cent of them.

Although the challenges to childhood deaths in the country remain finance and access to healthcare, the Permanent Secretary said that the Federal Government had adopted the iCCM as an evidence-based community curative intervention that addresses the issue of access, quality, demand and equity in healthcare delivery.

Troubled by the towering figures of under five deaths in Nigeria, in 2012, the Federal Government of Nigeria in collaboration with some development agencies, including the World Health Organisation (WHO), United Nations Children’s Fund (UNICEF), United States Agency for International Development (USAID), Malaria Consortium, Society for Family Health, European Union (EU), Christian Aid,  among other partners, embarked on the implementation of iCCM, focusing on the reduction of the burdens of deaths of under-five children from Malaria, Diarrhoea and Pneumonia in undeserved, hard to reach areas using Community Oriented Resource Persons (CORPs).

The overall goal of Nigeria’s iCCM according to Dr. Adeniran, is “to contribute to reduction in number of deaths among children under-five years of age through improved access to timely treatment of common childhood illness of pneumonia, diarrhoea and malaria within homes and community as well as identifying sick new-borns and malnourished children for prompt referral to a health facility for appropriate care”

Stressing on the need to take health interventions to communities, Dr. Adeniran said that 62 per cent of under five deaths take place in the home, while 38 per cent takes place in the hospital. This troubling figures, she stressed, portend that there was need to strengthen community-level health interventions that address access, quality, demand and equity through strategic partnership between health workers and families. This partnership according to her, had become expedient because healthy lifestyle starts at home, home is where treatment starts using locally purchased medicine, big segment of the population in the country do not have access to health facilities and even where access to health facilities is reasonably good, most children die at home without being tended to by health care givers.

Dr. Adeniran said that currently, there  are twelve states across the federation where iCCM   is being implemented. With the support of development partners such as the World Health Organisations (WHO), UNICEF, USAID, Malaria Consortium, Society for Family Health, Christian Aid, European Union, amongst other partners, the programme is being implemented in Abia, Adamawa, Bauchi, Benue, Jigawa, Kaduna, Kebbi, Niger as well as the IDP camps in Borno, and Yobe states. In addition to these ten states, pre-implementation activities had been done in Ebonyi and Kogi states.

In Niger state, North Central Nigeria, according to the report presented recently by Dr. Patrick Gimba, the iCCM Focal Person in the state, the implementation of iCCM through strategic collaboration between health care providers and the community had brought tremendous increase in access to quality health service through capacity building, quality service delivery and commodity supply. According to Gimba, appropriate treatments of confirmed cases of the three diseases were 306,148, for Malaria, 205,919 for Diarrhoea and 64,074 for Cough with fast or difficult breathing.

Abia state in South-Eastern Nigeria was one of the beneficiary states of iCCM. In fact, Abia along Niger state were the two pioneer states where the implementation of iCCM was birthed. According to a report that chronicles the success story of iCCM in the state, the programme commenced on 1st November, 2013 and was completed on 31st January, 2018 and within this period, 524,562 under five children were treated of malaria, while 204,836 and 193,486 were treated of Diarrhoea and Pneumonia, respectively.

The report also added that the project was implemented in fifteen local government councils out of the seventeen local government councils in the state. Despite the successes recorded, the programme, according to the report, was marred with lots of challenges as over 95 per cent of the female CORPs had no bank accounts, a scenario that created financial exclusiveness of female gender. Also, the protracted strikes of health workers in the state in 2014 and 2015 threatened training and project implementation activities.

The implementation of iCCM in the country also takes into cognisance the dangerous and volatile environment of the North Eastern Nigeria. The humanitarian crisis in the region has created congenial atmosphere for malaria, pneumonia and diarrhoea to flourish. Disturbingly, 28 per cent of over 1.7 million displaced individuals in the region are under five years. The World Health Organisation being concerned about the plights of these children, swung into action in 2015 and with the support from USAID, established some interventions which deal with the three childhood diseases in the IDPs camps and their host communities in Adamawa, Borno, and Yobe. To increase access to health services and reduce morbidity and mortality, WHO trained and deployed CORPs to provide an Integrated Community case management for treatment of Malaria, Diarrhea and Pneumonia, as well screening for malnutrition and health promotion. In addition, WHO provided commodities and stipend logistics to CORPs and supervisors to incentivize them and boost their enthusiasm.

While the iCCM is a donor-support programme, governments across all tiers are expected to key into this robust, innovative and cost-effective means of addressing health challenges of hard-to-reach communities. The Federal Government must take the lead by providing policy direction for the states and local governments so as to prevent 756,000 new-borns in Nigeria from dying annually. Professor Isaac F. Adewole, the Honourable Minister of Health recently re-echoed Federal Government commitments to scale up the intervention. He described iCCM as a learning curve in view of the lessons to be learned and the challenges that could be encountered.

“Drawing on the lessons learned, the National Council of Health in 2016 approved the scale up of iCCM to the 36 states and the Federal Capital Territory” the Minister said.

According to the Minister, “the vision of the of the current Government places people at the centre of development by ensuring Universal Health Coverage (UHC) through revitalisation of the Primary Health System as well as the Community structures. Opportunities abound therefore, especially the platform for delivery and funding of iCCM to sustain implementation in Nigeria.”