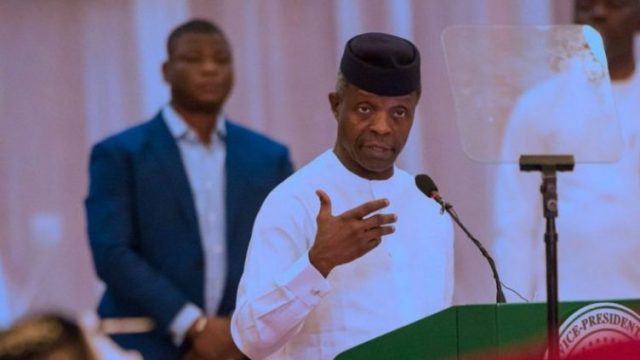 Perhaps, since the country’s return to civil rule in 1999, Osinbajo, a Professor of Law and Pentecostal pastor of the RCCG denomination, will qualify as the most engaged and engaging Vice President the country has had going by the volume of presidential functions subsumed within his care.

As they say in political economy, the political system- an embodiment of its politics, polity and style of politicking- of a country is as good as its economy. If the political system is good, the economy will be good and vice-versa. Realizing this incontrovertible fact early in the administration, Buhari, in his wisdom, decided to saddle Osinbajo with the management of the nation’s economy By virtue of the presidential delegation, for three years running now, Osinbajo has been the head of the economic management team comprising some ministers, governors and select hands from the private sector. Behind the scene, it is on record that the President, too, has been giving the needed political impetus to the team for it to actualize its aims and objectives. It is to the eternal credit of the team that the country was able to exit the economic recession that paralyzed the economy for close to two years.

While the signs were not so obvious, the nation’s economy was already in distress in the last quarter of 2014 prior to the ascension to the mantle of leadership of the Buhari Presidency in May, 2015. In essence, it was an inherited problem. But since government is a continuum, the new government had to face the challenge squarely. And squarely it did face it!

The economy had begun to show contractions as reflected in negative Gross Domestic Product(GDP) coupled with a double digit inflation before the inception of the current regime. Cognizant of the fact that any tardiness in responding to the distress could spell doom for the country thus casting the federal government in bad light, Osinbajo had to swing into action with immediate alacrity. Today, statistics from the National Bureau of Statistics show that the economy is gradually picking up,athough a lot still needs to be done in this direction.

In a way, Buhari is lucky to have Osinbajo as his deputy. Given the unfortunate ailments that assaulted the retired General from Daura, Katsina State, which made him to spendseveral months in the United Kingdom tending to his health, were Osinbajo an inordinately ambitious person, he could have pulled the rug off his principal’s feet. Already, there was pressure in some political quarters on him to pull a fast one on Buhari by some shoddy politicians who were already planning to deputize Osinbajo should the plan sail through. Against all odds, he remained loyal and committed to the mandate freely given to them by 15m Nigerians in 2015. An appreciative Buhari heaped praises on his loyal deputy when he returned from one of those journeys abroad.

In the course of this administration, Osinbajo has demonstrated timeless numbers that he is a reliable peace ambassador touring trouble spots in the country with a singular mission to restore peace to crisis-ridden areas. Not too long ago, at the height of the instability in the Niger Delta instigated by Niger Delta Avengers who vowed to cripple the economy through the destruction of pipeline installations, it took the interventions of Osinbajo, of course with the backing of the President, to meet with all Niger Delta thought leaders with a view to resolving the crisis when everything else had failed. His diplomatic missions to the region paid off eventually, the avengers sheathed their sword and allowed peace reign.

The issue of recent Biafra agitation in the southeast also attracted his intervention. He held several meetings with the socio-cultural and political leadership of the region, intimating them of the need to embrace dialogue rather than resort to violence and confrontation with the state on the agitation of the now proscribed Indigenous People of Biafra (IPOB). When all peace entreaties failed, and it did appear IPOB activists might trigger another avoidable industrial scale crisis in the zone, the President had to order the army to clamp down on the disturbing elements to foil their disturbances.. At least, in the interim, relative peace has returned to the region.

It is on record that acting at the behest of his boss, Osinbajo has toured virtually all parts of the country where there have been herdsmen killings of farmers etcetera to assure the communities of the government’s commitment to bringing peace and stability to them while also not sparing those who perpetuate such murderous killings. In the course of doing this, the VP has been unjustly criticized by some ill-informed Christians who feel that he is not doing enough to protect those who should be considered his Christian brethren. He was so moved by such baseless accusation that he retorted in one of the meetings recently that he was ready to resign his position as VP whenever he discovered it was conflicting with his faith as a Christian.

Osinbajo, smart, charismatic, engaging and unassuming, has been a quality addition to the Buhari administration. He is a perfect counterfoil to his principal’s taciturnity and occasional reclusiveness. He has brought so much dynamism to the administration to the extent that some political commentators call him the new TundeIdiagbon. The comparison is true to the extent that he is extremely loyal to Buhari as the late General Idiagbon was to Buhari when the latter ruled as military head of state in the 1980s. But that’s where the comparison ends, Osinbajo is a smiling and warm personality who does not have the often stoic and stern mien of Idiagbon. In any case, Osinbajo has remained a buffer to Buhari all through and through.

Because of his affable nature, warm personality, innovativeness and creativity, Osinbajo has become the nexus between the youth and the older generation, thereby giving the youth a sense of belonging and inclusiveness in the Buhari administration. He has become an institution to the extent that some young and upwardly mobile Nigerians now imitate his fashion style and even the way he walks and talks. Courtesy of his intellectual approach to governance, a lot of young Nigerians have now reaffirmed their hope and belief in the potential greatness of the Nigerian nation.

Through  his efforts, several youth who were hitherto hopeless and dejected because of unemployment now see a glimmer of hope through the N-Power social intervention scheme which currently has over 300, 000 young Nigerians on its payroll. This intervention has never been seen in the history of the country. Aware that sustainable growth and development of any country are premised on the enterprising innovations and innovativeness of its people, the VP, just recently was in Yola, capital city of Adamawa State, to launch an innovation hub centre. The centre is meant to bring to fore the creative ingenuity of young talented Nigerians who are bubbling with earth-shaking ideas.

As the country journeys to the 2019 presidential elections, there is no doubt, except he declines to run, that Osinbajo will be on the ballot on a joint ticket with Buhari who has signified his intention to seek for a second term in office. Of a truth, whatever success the Buhari administration has achieved, Osinbajo has made some significant contributions. You want to know anything about what Buhari has done in the last three years, just ask Professor Osinbajo anywhere you can accost him, you will be dazed by how he will relay all the facts and figures to you. In short, he is the memory card and data bank of the administration. Need it be said again? He is as integrity personified as his boss. What more can a nation ask for?