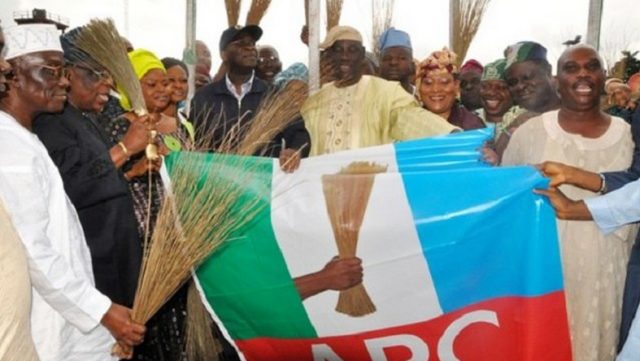 It can be argued with high degree of certainty that since 2015, our media, at all levels, is dominated by divisively negative reports, which portray APC and President Muhammadu Buhari as accomplices to some of the killings perpetrated by armed bandits. To a large extent, due to the associated ethnic and religious outlook of the bandits, both APC and President Buhari are derogatorily accused by political opponents and opportunists of sponsoring the banditry. With the cheap coincidence that the bandits are so-called Fulani herdsmen and President Buhari coming from Hausa-Fulani group, accusations of sponsorship get ridiculously presented to suggest refusal to combatively mobilize governmental intervention against the bandits.

Somehow, this accusation of APC and President Buhari sponsoring criminal armed bandits stubbornly gets stronger with every unfortunate attack against innocent Nigerians. Irrespective of the hard reality that the attacks are indiscriminately done against all Nigerians, covering all religious and ethnic groups, the anti-APC and anti-Buhari campaigns gets widely spread across all sections of the country. It is so outrageous that its constant media presence disparagingly suggests that both the APC and President Buhari are helpless.

Partly on account of the domineering influence of the negative publicity arising from all the unfortunate activities of armed bandits in the country, APC and governments it controls, at federal and state levels, are mischievously presented in sectional terms. Sadly, official communication, both from the party and agencies of APC controlled governments (federal and states) appear weak and reactive and as a result, both the party and its governments get diminished and development initiatives degraded to levels of nihility, with the consequences of the party, government and President Buhari denigrated and scorned as chauvinists.

Why is the APC, our governments and President Buhari unable to defeat this slanderous campaign linking them to criminality? What is the source of legitimacy for this anti-APC and anti-Buhari propaganda? Is it factuality or sophistication? Could legitimacy be the reason why development initiatives of the APC-led governments suffer pejorative judgements? Or is it that the initiatives fail to meet citizens’ expectations? Or could it be that citizens are not aware of most of the initiatives?

Be that as it may, part of the explanation would be the inability of both the APC and our governments to use public communication as means of winning public support, which essentially is about delivering messages to citizens. Ordinarily, the messages should explain how government actions, policies, projects and programs are solving or will solve problems. In the case of conflicts, the questions are; what is the cause, who is involved, what actions government is taking and how those actions are resolving or will resolve the conflicts? The messages should also be able to highlight challenges and difficulties and, again what government is doing to resolve them. On the whole, communication is all about engagements and developing platforms to stimulate citizens’ participation to respond to emerging problems facing our society and nation. It is also about confidence building in managing the business of government and winning minds, if you like, mobilizing support.

Although both the party, our governments and our leaders are able to respond to many emerging situations, including violent attacks and activities of bandits against Nigerians, in most cases the responses are plain reportage of statements credited to the party and our political leaders, including President Buhari. These statements are hardly processed to accommodate citizens’ expectations or perspectives. As a result, they end up being blank statements, which represents government’s views and opinions. In classical British government lexicon, our colonial forebears, such statements would have been referred to as “White Papers” i.e. command to institutions, society, citizens, etc. Such commands could have the force of law if backed by legislation.

Somehow, the similarity between government statement on issues of criminal activities of armed bandits and a “White Paper” is that both are conclusive, although a “White Papers” would have been the product of investigation by committee, commission or panel setup by government. A major underlying feature of such statements as a means of communication therefore is that they remotely reflect the views of citizens, and to the extent of that alienate the benefactor – the party, government and our political leaders. Communication then become passive, reactive and hardly projecting solutions to problems.

In so many respects, it is hardly the case that PDP is managing public communication differently. It is certainly not also the case that PDP is able to produce responsive, participatory, proactive and problem-solving communication. To the contrary, its communication is also passive, reactive and not able to project solutions to most of the problems bedeviling the nation, which APC is considered the sponsor. In addition, in recent time spuriousness is also a major attribute of PDP’s communication strategy. The reality however is that the inability of APC to win public support due largely to passive and reactive communication repel aggrieved Nigerians to PDP. In some cases, many of the aggrieved Nigerians were supporters, if not members of the APC.

Why should political communication be just about transmitting raw information in the form it is generated. Why shouldn’t communication of APC and the governments’ it produces be about citizens’ engagement? Given that APC is a progressive party, shouldn’t communication also serve as a means of getting feedback from citizens regarding policies, programs, projects, actions, etc.? Methodological issues of getting feedbacks from citizens and how it contributes to shaping and reshaping government policies, programs, projects, actions, etc. should provide the source of public confidence on the party and our governments. Once the source of public communication is remotely linked to broader section of society it will at best be a journalistic exercise.

Isn’t journalism also communication? Academicians should be able to enlighten us better. For our purpose however, two critical factors should define the kind of responsive, participatory, proactive and problem-solving communication. The first is the message, which should highlight the issue or problem and how the party (APC), government and our leaders are attending to it. Challenges, problems or difficulties being experienced should be integral parts of the message. The second factor is processes of citizens or public engagement to transmit the message. This second factor is critically important as it is in truth the capacity to facilitate it that brings government and political leaders closer to citizens.

A remarkably interesting reality is that in our context, in addition to having passive and reactive statements as the message, predominantly the mass media, which comprises newspaper, television, magazine, internet, etc. become the platforms for engagement. This weakens communication as it become linear and unable to engender interaction and produce common ownership of messages. This reality re-enforces the journalistic orientation of communication, based on which journalists are assumed to be the exclusive candidates for managing public communication in Nigeria.

It would appear that this is a national mindset, which ends up setting up public communication activities in conformity with newsroom format. A good reflection of our not too distant experiences would reveal that up to the mid 1980s, this wasn’t the case. We used to have relatively responsively proactive and if you like problem-solving communication. For those who witnessed the War Against Indiscipline (WAI) campaign of 1984 would recall how government ran series of campaigns through messages, which depicted incontrovertible problems of the nation. Apart from being able to present the campaign messages in an incontrovertible manner, they also had inspiring solutions. In the periods of those campaigns, government ensured that those projected solutions dominated our national consciousness.

Incidentally, the WAI campaign was under President Buhari’s tenure as military Head of State. The WAI campaign of 1984 could be said to have mobilized national consensus on the problems of indiscipline in the country. Beyond broad consensus, it also produced consensus regarding many of the manifestations of indiscipline. Some sections of the elite were unhappy about the tenacity of purpose of the 1984 Buhari administration to implement corrective measures. However, even those unhappy couldn’t disagree with the campaign messages. Effectiveness of the WAI campaigns to produce national consciousness combined with the tenacity with which the 1984 Buhari administration prosecute the campaign is substantially the source of President Buhari’s political popularity today, especially in the Northern parts of the country.

Given the menace of armed banditry across the country, why isn’t it possible for government to roll out a national campaign against banditry similar to the WAI campaign of 1984. Perhaps given the peculiarity that it is armed banditry and not just civil disorder, which was what the WAI campaign of 1984 attempted to respond to, a military operation is the requirement. This is clearly what is being applied. Beyond military operations however, further campaigns to mobilize citizens highlighting civil actions needed to complement the military operations would have been very strategic. Such a campaign should have similarly come with incontrovertible messages capable of generating common national consensus about what the problems are, who is creating them, who are victims, etc.

A very easy explanation why we are having military operations against the menace of armed bandits without corresponding national campaigns could be the difference between military and civilian regimes. While that may be part of the explanations, the truth is that public institutions saddled with the responsibility of engineering responsive and problem-solving communication in the country have undergone destructive experiences. As it is today, in most cases, these institutions would at best be ghosts of their 1984 formations.

Partly because of this circumstance, combined with journalistic format of operation, production of such campaigns would have to be sub-contracted, which make cost extraneously high without any guarantee that the content will not be reduced to projecting biases. It will require strong commitment of our political leadership to produce a new problem-solving communication framework, which should prioritize re-organizing and developing new public institution producing proactively responsive and incontrovertible messages. The new framework should be able to setup robust platforms for citizens engagement. That should be the brand of NEXT LEVEL public communication – it should be about national unity, citizens’ engagement, developing public institutions, nurturing productive, competitive and economically viable private media which politics of change!