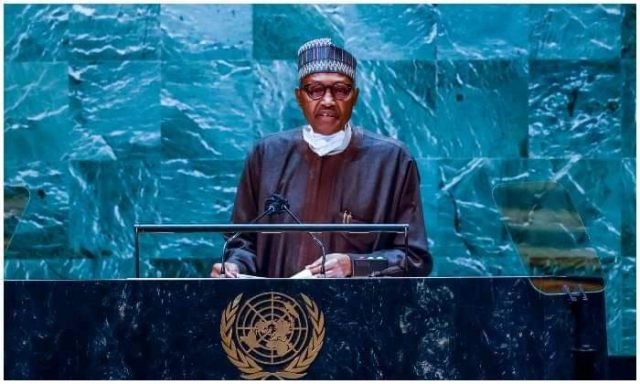 President Muhammadu Buhari’s speech at the United Nations General Assembly (UNGA) held audience spellbound; with the swag of charisma, he spoke to the world on issues of concern and the triumphs of good over evil. By the time he was up, the audience in the hallowed house rose in pulsating applause – for an unstained man, a man with the tenacity of purpose and the sincerity of governance has spoken – as usual, in cultivated frankness. A group – defined in inconsequential relevance thought otherwise, the Peoples Democratic Party (PDP) House of Representatives caucus, thought otherwise; to them, the President didn’t speak their mind. The minority caucus through its leader Ndudi Elumelu claimed in its reaction that the President’s speech did not reflect the country’s current realities. The group may be right, however, only in their own reality. This group, like its mother party, deludes itself only in things that add no value to governance. Like before, they prefer to luxuriate in the inanities of governance and frown at tangible governance that better the lives of citizens. Having been baked in the absurdities of poor governance where individual interest supersedes the collective interest, they see genuine efforts as strange and offensive to their orientation.
Rather than do a postmortem of the President’s 18 minutes speech at UNGA, the group, as usual, climbed the mischief podium to ventilate their usual watery opposition – forgetting that opposition ordinarily comes with substance. A serious political opposition would have taken time to dissect and compare the points raised by the President with the realities on ground. Only those infused with the fluid of mischief will deny Nigeria’s response to the COVID-19 pandemic – even countries with paradise-like health architecture didn’t find it easy-same pandemic Nigeria managed.
The world rose in respect and accolades for President Muhammadu Buhari in this regard, such that the UN Secretary-General Antonio Guterres held a virtual news conference in April 2020 where he singled out Nigeria as one of the few developing countries which, according to him, showed remarkable capacity by setting up emergency hospitals. This is exactly what the President alluded to in his UNGA speech when he said ‘Nigeria built isolation centres and emergency hospital wards in record time’ amongst other pharmaceutical and non-pharmaceutical measures taken.
Verifiable records abound that the Buhari administration indeed established field hospitals as well as expanded facilities in existing hospitals at a time the international community was still hailing the country’s COVID-19 response so much so that Nigeria was ranked 4th in a global normalcy index by The Economist magazine. If this kind of milestone fascinates the world, why should a tiny group be disgruntled? Are we saying there is a price for needless mischief?
A people who denigrate their nation for ephemeral oppositional soothing is a people with utter disdain for progress. At a time Nigeria is doing everything possible to curtail and end the reign of terror groups, a political party is out in the open dancing in denigration of Nigeria’s effort to end the reign of terror. There is no denying the fact that association of criminal elements, terror groups and other associated affiliates are being spoken to in the bitter language developed to undesirable elements.
Even those under whose watch terrorist groups like the Boko Haram reigned supreme to the extent that suicide bombings were a weekly event in the Federal Capital Territory (FCT) and other parts of the country are now talking like saints. The monster they refused to tame yesterday is what the present administration is squarely dealing with. As we speak, no fewer than 8,000 Boko Haram fighters and their families have surrendered to troops in the aftermath of massive air and ground assault on their hideouts in the Sambisa Forest and the fringes of Lake Chad – only a purposeful government shows this kind of political will.
For the pained caucus of inconsequential relic, you are advised to be more engaging, more purposeful, and impacting; for the drum of mischief are beaten only for those with mischievous intents, President Muhammadu Buhari is too busy and focused to be distracted by your fading echoes.