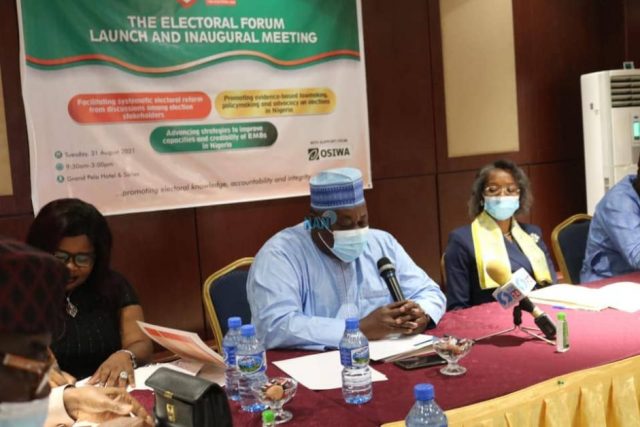 They made the call on Tuesday, at a roundtable on Electoral Offences; Ensuring Documentation and Effective Prosecution organised by the Electoral Hub, an organ of the Initiative for Research, Innovation and Advocacy in Development (IRIAD) in Abuja.

The stakeholders said that the commission was crucial as it would handle electoral malpractices and prosecution of offences such as vote buying, thuggery, rigging, violence among others during elections.

They said that the measure was necessary to tackle the act of impunity by politicians who commit such crimes and either don’t get prosecuted or get away with it with a slap-on-the-wrist sanction.

According to Jega, Nigeria’s electoral process be it pre, during and post periods is bedeviled with numerous challenges of malpractices.

The former INEC chairman said that there were many categories of offences but his worry was the impunity with which these offences were committed.

He added that politicians, political parties, observers and even the security agencies were sometimes culprits in the way the offenses were perpetrated.

Jega, therefore, said that the establishment of a body to look into the issues of electoral offenses would help to end impunity.

“If we can have an electoral offences commission that will focus in addressing the issues like ICPC or EFCC that have investigative and prosecutorial power, it will be able to address issues of impunity, which undermines electronic integrity.

“I urge stakeholders to key into the idea of establishing an electoral offences commission because of the intrinsic value of the work that they will do in terms of upscaling the integrity of the electoral process.

“It possible to conceptualise a compact agency with defined responsibilities and also getting the right kind of people to mount it just to focus on electron offences.

“If we are able to do that, we may be able to minimize the impunity with which electoral offences are committed and the huge challenge is how to address it,” he said.

INEC Chairman, Prof. Mahmood Yakubu, represented by Alhassan Umar, Litigation and Prosecution Department INEC, said that the enormity of the assignment regarding prosecution of electoral offences was beyond the capacity of INEC.

This, Yakubu said, was because although the law empowered INEC to prosecute, it did not give it the power to arrest and investigate.

“It is recommended that, that power should be provided.

“There should be a body, the electoral offences commission, that will be saddled with that responsibility so that INEC can focus on its core mandate of conducting election and facing post-election assignments.

“There is a bill now pending before the National Assembly for the establishment of that body that INEC and other stakeholders in the electoral process thought it wise that there will be improvement and effective prosecution if that body is established,” he said.

Ms Princess Hamman-Obels, Director, The Electoral Hub, said that elections were central to democracy although usually highly competitive and combative creating the great temptation to have victory at all costs by engaging in various types of malpractices.

Hamman-Obels said that it was well known that electoral malpractices and the prosecution of electoral offences were recurrent issues in Nigeria.

The director added that electoral offences such as vote-buying, thuggery and rigging have remained a burden to Nigerian.

She said that electoral fraud and malpractices were rooted in the `do or die” politics of Nigerian politicians and political parties and corruption amidst votes buying and selling among others.

“The result is that without access to huge amounts of money, it is incredibly difficult if not impossible to contest elections in Nigeria.

“ The way electoral offences are addressed is a key indicator of the integrity and credibility of elections,” he said.

Hamman-Obels said that different electoral reforms, panels and committees have all identified electoral malpractices and offences as a major challenge to the integrity and credibility of the electoral process.

She added that they had also recommended the establishment of a separate body such as the National Electoral Offences Commission to address the critical challenge in terms of documenting, and prosecuting electoral offences.

Hamman-Obels said that INEC had been tasked with enormous responsibilities already, therefore, a separate body was necessary to see to the investigation and prosecution of electoral offenders to save Nigeria’s democracy. (NAN)