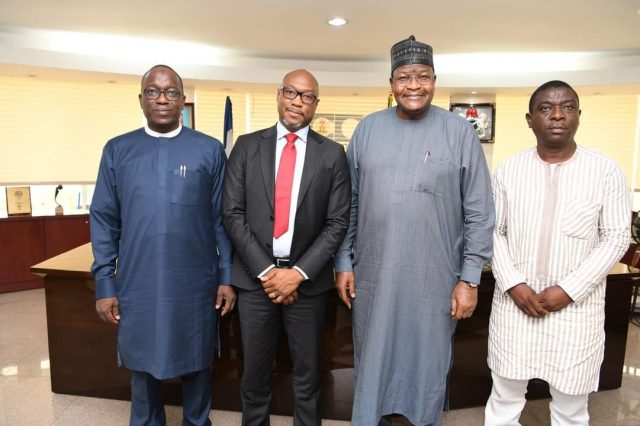 The Executive Vice Chairman (EVC) of the Nigerian Communications Commission (NCC), Prof. Umar Danbatta, has promised the new leadership of the West Africa Telecommunications Regulators Assembly (WATRA) of the unflinching support of the Commission towards advancing the socio-economic agenda of the Assembly for the sub-region.

Danbatta gave the pledge during a recent courtesy visit of the new executives of WATRA, led by its new Chairman, Sekou Oumar Barry of the Republic of Guinea. Barry came to vist Danbatta in company of the first and second Vice Chairmen of the Assembly, representing Mali and Sierra Leone respectively; as well as the Executive Secretary of WATRA, Aliyu Aboki, among others.

“In my capacity as the immediate past Chairman of WATRA, I promise my commitment to always share ideas with the new leadership of WATRA towards consolidating the successes so far recorded by WATRA under my leadership. I will give advice that will make you succeed as a friend and not the one that will undermine your authority,” Danbatta said, while welcoming the WATRA team in his office.

Speaking further, the EVC urged the new WATRA chairman to ensure diligent implementation of the new Strategic Management Plan (SMP) 2022-2024 developed for WATRA. The EVC also emphasized that the strategic vision plan is expected to guide the activities of the Assembly over the next years.

According to Danbatta, the past one year of his tenure as former chair of WATRA has been eventful with a lot measures put in place towards deploying the power of Information and Communications Technology (ICT) for advancing socio-economic development of the sub-region.

Danbatta acknowledged the important role WATRA has been playing in creating policy, legal and regulatory frameworks in the sub-region since the mid-1990s and commended the synergy among member states that has resulted in significant growth to the ICT ecosystem.

“I would like to congratulate my dear brother, Sekou Oumar Barry, on your emergence as the new WATRA chairman and to express, in very clear terms, our commitment as NCC and in my capacity as immediate past Chairman of WATRA to support your leadership to succeed in consolidating on existing achievements of the Assembly towards taking WATRA to a greater height,” he said.

Reinforcing his delight, Danbatta said, “This is an action in the right direction because we cannot deny the fact that successes are needed and financial and human resources are crucial to achieving success in any organization and WATRA with 16 member countries is not different. The expectation of our citizens is very high, especially in the area of ICT and we must strive to meet and surpass their yearnings.”

He further tasked the new WATRA executives to roll their sleeves and deepen the work they had started towards achieving the mandate, vision and mission of the Assembly. “If we work together as a team, I believe we would make a lot of difference in a manner that will result in the socio-economic transformation of our sub-region in order to improve the standard of living of our people as we have seen this done successfully in many countries. So, we can repeat the same feat here in Africa,” he said.

In his response, Barry, who thanked Danbatta for making giant strides during his one-year tenure as Chairman of WATRA, assured of his readiness to work closely with member states and the EVC for valuable advice and guidance to collectively take WATRA to the next level over the next one year.

He pointed out that his leadership will focus on four key areas of priorities. These, according to him, include ensuring that the SMP is finalized and fully becomes operational, ensuring that member fees contribution is revised upward so that WATRA will have adequate resources to run its operation, build its permanent structure, and ensuring that the regional roaming policy for the sub-region becomes a reality.

“We want to ensure that the plan you started is not going to stop. We understand that the time left for us is short. We know we cannot do everything and that is why we are going to be focusing on the four key priorities areas as itemized above so that at the end of the tenure we can say we have succeeded on those priorities,” Barry said.

WATRA, among other objectives, serves as a platform through which telecommunications regulators work together to broaden access to ICT services in the sub region. It also promotes the adoption of best global practices that stimulate investment in telecommunications infrastructure and services, deliver cheaper services to more citizens and connects people, societies and economies across West Africa and beyond.