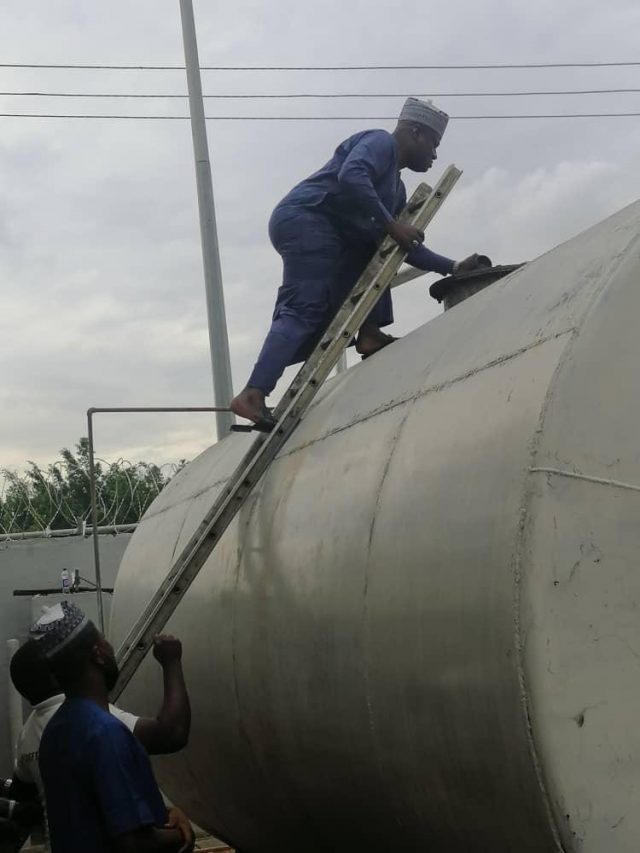 A Permanent Secretary in the Ministry of Defence, Dr Ibrahim Kana is reported to have extended his schedule to include supervising the day to day cleaning of the toilets in the ministry. Feelers have it that the man resumes work daily as early as 7 am to supervise the workers saddled with the task of keeping the conveniences clean- a development though considered bizarre but now yielding results as the office complex now emits pleasant smells that make the environment conducive. In a similar vein, the man caused a stir when he climbed atop a giant 33, 000-litre tank that harbours the diesel used in powering the ministry’s generator plant. Miffed by the incommensurable volume of diesel consumed daily to power the Ship House complex, he went out on cause finding mission and to get the answer, he climbed the tank. His finding became a working template that has brought about reduction in cost and eliminated wastage thus ensuring steady power supply at a minimal cost that has led to improved efficiency in the ministry.

While the gestures of the Permanent Secretary may be considered unusual by many people, the little efforts have restored sanity in administration and curbed leakages. According to a senior staff of the Ministry who did not want his name mentioned, “staff members of the Ministry who were hitherto relaxed and showed lackadaisical attitudes towards work are now more involved and enthusiastic about their responsibilities and duties.”

“Little things we usually ignore are what make office work. When our Boss started monitoring those in charge of sanitation, many thought it was too petty but they didn’t know he was making the environment conducive for everyone. Today, I can use the toilet conveniently. When you have joy at work place, it will radiate in all that you do as member of staff. I think others have many things to learn from the silent revolution that is happening in the Ministry of Defence”. The anonymous officer said the Permanent Secretary often say “Change begins with me and not the President of Nigeria”.