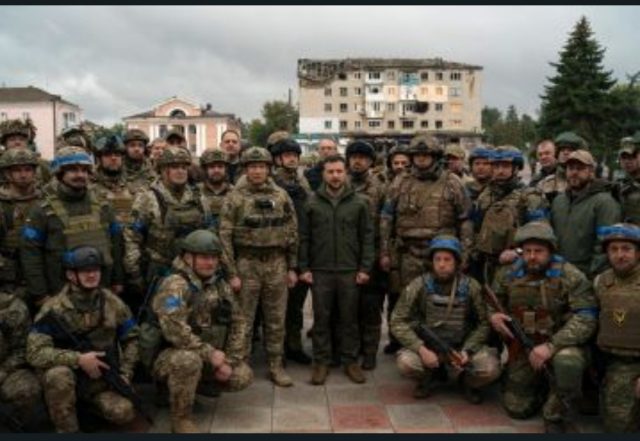 Ukrainian President Volodymyr Zelensky on Wednesday visited the east Ukraine city of Izyum, the military said, one of the largest cities recently recaptured from Russia by Kyiv’s army in a lightning counter-offensive.

The military in a statement on social media that Zelensky and military officials “took part” in a ceremony raising the Ukrainian flag over the captured city, which was key for Russia’s ambitions to capture the Donbas region.

Pictures distributed separately by Zelensky’s office showed the Ukrainian leader wearing dark-green and flanked by guards as he was taking selfies with soldiers and meeting troops at a flag-rising ceremony.

Ukraine has claimed sweeping successes in the northeastern Kharkiv region that borders Russia in recent days and also claims to have clawed back territory along a southern front near the Kherson region on the Black Sea.

Kyiv says since the beginning of September its forces have retaken hundreds of village, towns and cities that were captured by Russian forces that invaded Ukraine on February 24.

Moscow said Wednesday however that its forces were hitting back on areas recaptured in Kharkiv with “massive strikes,” claiming — without providing evidence — to have inflicted losses on Ukrainian military hardware and servicemen.

In a battlefield update on Wednesday, Russia also claimed to have captured dozens of Ukrainian servicemen in the southern Kherson and Zaporizhzhia regions.

The Ukrainian official in charge of the eastern Donetsk region, which has been partially controlled by pro-Moscow separatists since 2014 said Russian forces had attacked the entire frontline region over the past 24 hours.

Pavlo Kyrylenko, the Donetsk governor, said one civilian had been killed and again urged all others to leave, describing the order as a “matter of life and death.”